We present you an in-depth look into the Universal Detector, as well as an application example in the form of an aspherical focusing system.

The all new version 2023.1 of the fast physical optics modeling and design software has finally arrived. And with it come lots of new features. One we want to particularly highlight is the new Universal Detector and the evolution it brings with it in terms of detector modeling. This new element replaces the Electromagnetic Field Detector and like its predecessor, can display any field component in x- and k-domain. Furthermore, with its inclusion of customizable add-ons, this detector allows for utmost flexibility, as any physical value can be calculated from the provided field information, directly.

Hence, for this week’s newsletter, we present you an in-depth look into the Universal Detector, as well as an application example in the form of an aspherical focusing system. In this optical setup we display the field (including the phase distribution), calculate the energy density of the focus and investigate the change in the spot size as the beam travels through its focal region. With our new detector concept, this all can be carried out with the same detector.

END_OF_DOCUMENT_TOKEN_TO_BE_REPLACED

Profile Editor: the one stop that provides a global overview of all the simulation parameters of the system

Configuring Your Simulations in the New VirtualLab Fusion 2023.1

The wait was definitely worth it – the latest version of VirtualLab Fusion 2023.1 has been released! And, with it, a completely overhauled way to configure the parameters of your simulation that offers more transparency, more control and is subsequently easier to use, making the experience of working with the Fast Physical Optics software a lot smoother for our users. Whether you want to take advantage of the more straightforward off-the-shelf “configuration packages” and default settings we offer for those starting out with the software, or whether you prefer to roll up your sleeves and get into the nitty-gritty of it all and manually adjust all the advanced settings yourself – It’s your call!

The documents linked below explain the different places in the software where you can control all the different aspects of the configuration of your Optical Setup, like the inclusion of diffraction in your simulation or sampling considerations, among many other things, and also introduce the new Profile Editor: the one stop that provides a global overview of all the simulation parameters of the system and allows you to pinpointedly control each and every one of them, should you so desire.

Take a look, and learn how to unleash the power of Fast Physical Optics!

END_OF_DOCUMENT_TOKEN_TO_BE_REPLACED 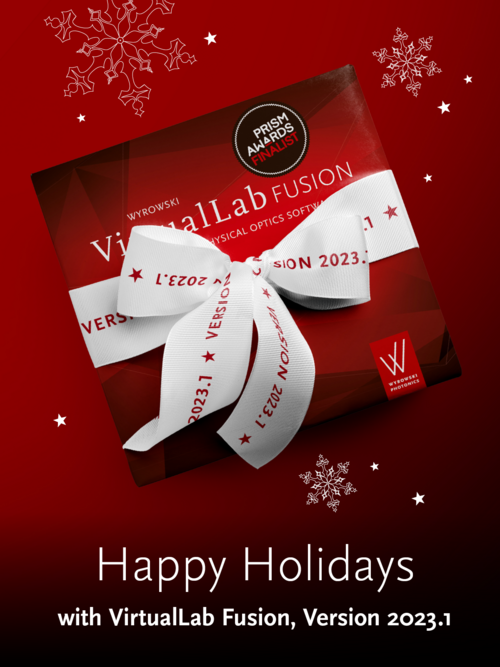 We showcase an investigation of ghost images in a collimation system, accompanied by another document that provides an in-depth look.

Many optical systems are, in practice, affected by the presence of stray light.
For example, reflections at the surfaces of each component of the optical system and other scattering processes are causing additional light that interferes with the actually desired signal of the system.
The potential interference patterns which can result - also known as ghost images - may negatively affect the overall performance of the setup and are thus worth investigating in detail.

VirtualLab Fusion’s nonsequential fast physical optics simulation engine allows the optical engineer to include or disregard multiple interactions between surfaces in a flexible, convenient, easy-to-use way. This is achieved by VirtualLab Fusion’s so-called “Channel Concept”, where for each individual surface the corresponding “input-output pair” of channels (transmission and reflection both from left and right, four channels in total) can be opened or closed at will. The software can then automatically determine which paths the light will follow through the system, and trace the electromagnetic field accordingly.

As an example, we showcase an investigation of ghost images in a collimation system, accompanied by another document that provides an in-depth look at the mentioned channel concept:

END_OF_DOCUMENT_TOKEN_TO_BE_REPLACED

The methodical observation of astronomic phenomena is one of the oldest forms of optics. Over time, ever more advanced telescopes and other related optics have been developed to give scientists an ever deeper look into our galaxy and the universe.

To analyze the performance of such systems, the fast physical optics modeling and design software VirtualLab Fusion offers the optical engineer multiple tools, ranging from quick system visualization based on ray tracing, to a fully electromagnetic physical-optics propagation of light, including diffractive phenomena.

To showcase the potential of VirtualLab Fusion in the field of astronomy, we highlight the following two use cases this week: The first one presents a full model of the famous Schmidt-Cassegrain telescope, including a discussion of the effects of the Schmidt-Plate. In the second use case we simulate different afocal systems for laser guide stars, based on the work from L. Clermont, et al., "Design of a laser guide star for applications to adaptive optics".

END_OF_DOCUMENT_TOKEN_TO_BE_REPLACED

Gratings are some of the most fundamental tools in the arsenal of any optical engineer.

Gratings are some of the most fundamental tools in the arsenal of any optical engineer. To design and analyze this kind of component, the fast physical optics modeling and design software VirtualLab Fusion provides its users with many helpful tools. These include the Parametric Optimization, to easily optimize your systems, and the Parameter Run, which allows you to perform parameter sweeps in order to study the influence of those parameters on the overall behavior of the setup. Furthermore, this enables the use to investigate effects introduced by deviations due to specific fabrication processes in detail. Different solvers are also put at your disposal for the simulation of the interaction of the field with the grating, with different assumptions and the corresponding levels of approximation. These range from the rigorous Fourier Modal method (FMM) to the Thin Element Approximation (TEA), which works well for larger structures with a shallow relief.

END_OF_DOCUMENT_TOKEN_TO_BE_REPLACED

For this week’s newsletter, we have selected two examples related to aberrations.

The main functionality of an imaging system is to gather as much of the light emanating from each of the object points as possible, and to make those cones of light converge again at the image plane, so that each object point is mapped univocally to its counterpart in the image plane. The performance of such systems is generally judged on the basis of how well this correspondence between object and image points is maintained, with the well-known theoretical limit imposed by the phenomenon of diffraction: even in an optical system that, according to the laws of geometrical optics, will map all the rays coming from one object point exactly to a single, mathematical, image point, diffraction will cause that image point to smear into a small, but finite-sized, spot. This diffraction-limited situation is what the design of an imaging system typically aims for, with the diffraction-limited field having a spherical wavefront. Geometrical deviations from this spherical wavefront are known as “aberrations”, and are characterized using different polynomial bases that help quantify their strength and shape. The presence of aberrations will increase the smearing of the image spot and consequently decrease the quality of the imaging system.

With the fast physical optics software VirtualLab Fusion aberration effects can be studied well. For this week’s newsletter, we have selected two examples related to aberrations: the first, of how the typical wavefront aberrations affect the pattern in focus of a spherical wave, and the second, of how the astigmatism of a high-power laser diode influences performance in the focal region. Using the free space propagation field solver and the Local Plane Interface Approximation (LPIA), diffraction, polarization and vectorial effects that can potentially degrade an image can all be included in the investigation.

END_OF_DOCUMENT_TOKEN_TO_BE_REPLACED 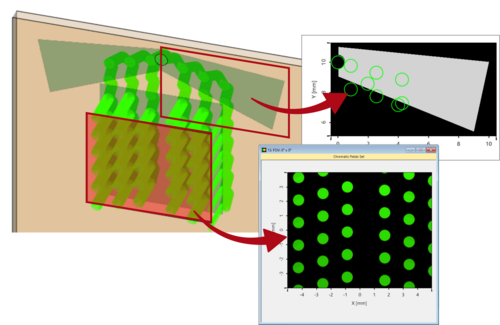 Most common designs of augmented and mixed reality (AR & MR) systems incorporate lightguide designs with surfaces that contain micro- and nanostructured regions (gratings) for coupling and pupil expansion purposes. Many of the complex effects which influence the final quality of the device (for example, crucial aspects like how good the uniformity is in the eyebox for the different field-of-view modes that describe the digital image) have their roots in physical optics: polarization (initially of the source, as well as how the polarization changes as the light propagates through the device), coherence, diffraction, etc.

With its Light Guide Toolbox, the fast physical optics software VirtualLab Fusion provides the optical engineer with all the necessary tools to tackle the modeling and design of this type of device. To demonstrate its capabilities we showcase here two examples of simulations of different AR & MR setups.